Local surface water supplies and SWP supplies are treated at the Sandhill Water Treatment Plant (Sandhill) and come either from Lytle Creek or the SWP.  SWP supplies are purchased by FWC from either Inland Empire Utilities Agency (IEUA) or San Bernardino Valley Municipal Water District (SBVMWD). IEUA purchases SWP water from the Metropolitan Water District (MWD) for wholesale redistribution to a number of water purveyors, including FWC. 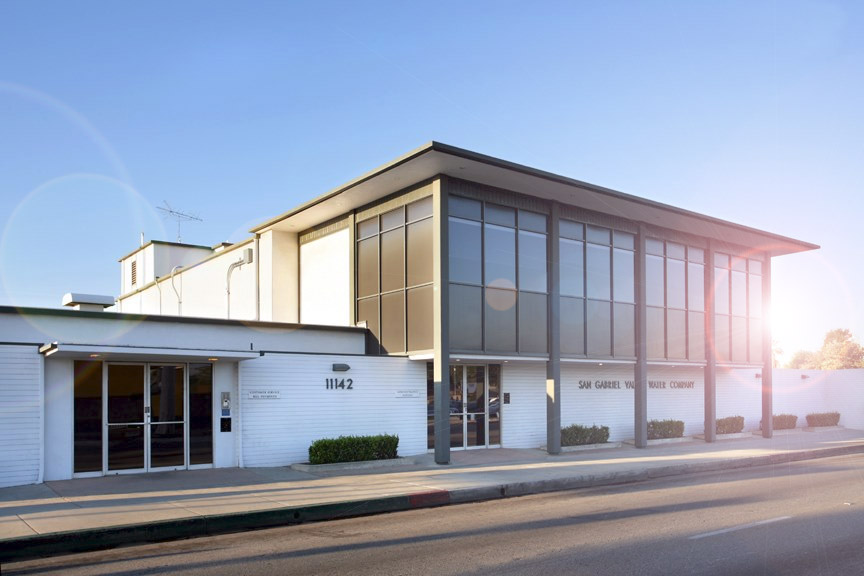 Inspired by this case study? Curious about your own opportunity?

The IEUA supply pipeline (capacity up to 40 cubic feet per second) enters Sandhill at approximately 120 – 150 PSI through an on-site pressure reducing station (PRS). A sleeve valve is used as pressure reducing valve (PRV) to reduce the pressure to 5 psi. Flow rates are manually adjusted and selected by operations personnel ranging from 4 cfs to 13 cfs.

The hydropower station is installed in parallel with the sleeve valve to harness the excess energy. The schematic flow diagram of the hydroelectric station is presented in Figure 1 below. The hydropower station consists of two pump-as-turbine (PAT) units with total capacity of 310 kW (one operates at 1800 gpm, and the other at 3600 gpm). All the generated energy is exported to the grid and FWC receives credit based on the energy consumption in Sandhill WTP at the same tariff as what they would have paid. As of February 2018, the annual power generation was about 1,121,087 kWh, which was used to offset power in the facility (606,808 kWh). FWC received about $12,000 from the Southern California Edison (SCE) for the excess energy generated (514,279 kWh).

SGVWC has long recognized the large energy potential embedded in their systems which could be used to offset the energy in their facilities. From the public policy perspectives, there were also initiatives from the California Public Utility Commission (CPUC) to direct utilities to gain better understanding of the water-energy nexus in their systems.

In the proceedings, utilities were recommended to estimate the potential embedded energy in their water distribution systems and identify the potential use of this excess energy. SGVWC considered this concept to be attractive as any saving that the facility achieves can indirectly impact customers through lower water bill. After discussion with the board, SGVWC decided to contract with NLine Energy to assist with the development of hydropower station at one of the facilities. NLine Energy also assisted SGVWC in securing some of the funding, which was one of the most important factors in the advancement of this project. SGVWC received a cash grant from U.S. Treasury (1603 U.S. Treasure Grant) which covered 30% of the total project cost for eligible renewable energy projects as well as incentives from Self-Generation Incentive Program (SGIO) sponsored by CPUC.

SGVWC conducted an initial feasibility assessment of the potential project between June and August 2011 (see Figure 2 for project timeline) and identified three alternative locations within SGVWC systems: F13, F14 (Sandhill), and F19.  Initial assessment showed that location F14 in Sandhill Water Treatment Plant (managed by FWC) to be the most economically feasible site due to its large pressure differential (breaking 120 – 150 psi to 10 psi). There was also negligible change in the flow rate in this particular pipeline during 24/7 operation (4 – 13 cfs, but generally stays around 10 cfs).

Based on these conditions, two types of turbines were proposed: Pump-as-Turbine (PAT) and Francis turbine. For Francis turbine, flow can be varied to accommodate supply or demand variations but at the expense of reduced efficiency and power generation. A Francis turbine also becomes unstable below 40 percent of full flow and does not operate well at less than 40 percent of full electrical load. Thus, it was determined that installation of two Pump-as-Turbines (PAT) would be most suitable for the site. The twin PATs operate in both sequence and parallel, enabling the system to process flows ranging from 4 cfs to 13 cfs with a system nameplate rating of 310 kW.

The feasibility assessment determined if the project was feasible from an economic, environmental, technical and regulatory perspective.  This preliminarily assessment took approximately 3 months to finish and determined that the initial project cost was approximately $1,400,000, would generate approximately 1,000,000 kilowatt hours annually and would have a sub 10-year payback.

It is also important to note that these estimation were made based on the assumption that the IEUA’s water uptake capacity was 5000 acre-feet/year which would be taken over a period of approximately seven to nine months, depending on hydrology and water demand. After conducting the feasibility assessment, FWC proceeded to complete 100% design in March 2013, and finally received the permission to operate in November 2013. It took approximately 2 years to complete the project, as depicted by Figure 2 below. 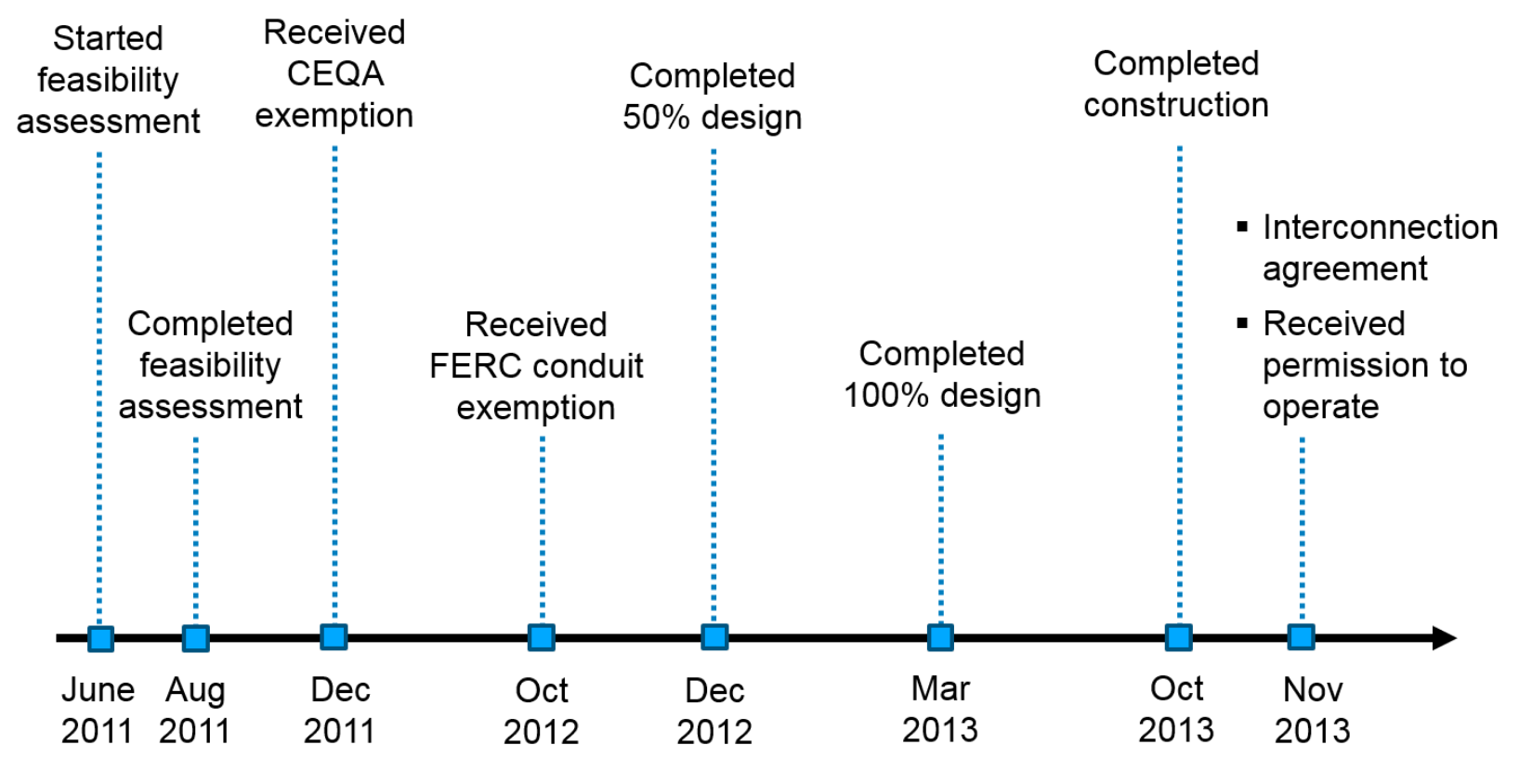 Figure 2. The timeline of the project starting from feasibility assessment to operation startup

California Environmental Quality Act (CEQA)
The California Environmental Quality Act (CEQA) allows a Class 28 Exemption for small hydroelectric projects. Section 15328, titled, “Small Hydroelectric Projects at Existing Facilities”. This project meets most of the physical requirements for a Categorical Exemption (CE), however further assessment of the system was conducted to determine if: (i) the project will not entail any construction on or alteration of a site included in or eligible for inclusion in the National Register of Historic Places and (ii) any construction will not occur in the vicinity of any rare or endangered species. To address these issues, SGVWC obtained biological and historical databases including;

Through assessment of these databases, SGVWC provided full evidence that that its system was eligible for CEQA exemption and Notice of Exemption (NOE) was submitted to the Lead Agency (City of Rialto, California). CEQA exemption was obtained in December 2011, as depicted in the project timeline above (Figure 2).

The FERC conduit exemption was issued in perpetuity, and projects up to 5 MW were not charged an annual fee. This project qualified and secured the FERC conduit exemption in October 2012. Note that at this time FERC had not simplified its regulation processes for small hydropower projects as the “Hydropower Regulatory Efficiency Act” was only signed in August 2013. This project could have been eligible as Qualifying Conduit Hydropower Facility, which is not required to obtain license or exemption from FERC. Eligible facilities must only file a Notice of Intent (NOI), thus the process is significantly faster (about 45 days) than exemption or licensing processes.

NLine Energy provided the design of the powerhouse as well as technical expertise throughout the entire project. However, FWC utilized service from the same contractor that built the water treatment plant (RC Foster) during construction. Using the same contractor was considered to be beneficial for a retrofit project as the contractor was already familiar with the existing system.

Since the hydroelectric station was constructed upstream of the water treatment plant, the design flow and pressure for the turbines were determined based on downstream WTP requirements. During the design stage, FWC also specified that 5,000 acr-ft of water from IEUA would be taken over 12 month period. Based on this information, 4 – 12 cfs was determined as the range of design flows that would allow FWC to achieve the 5,000 ac-ft goal, assuming the differential pressure of 130 psi. In order to allow for flow selection flexibility, two PATs were selected. The lead PAT can pass approximately 4 cfs (1800 gpm max) and the lag PAT can pass approximately 8 cfs (3600 gpm max). Both PATs operating together are expected to process up to 12 cfs and produce 310 kW maximum for the hydroelectric station. Photographs of the twin PAT units during construction and operation are provided in Figure 3. 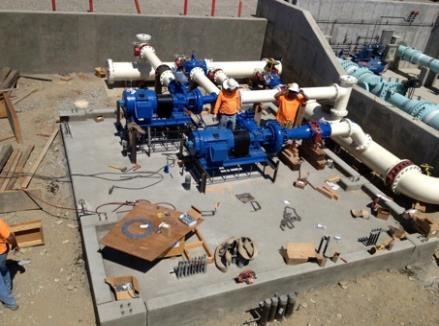 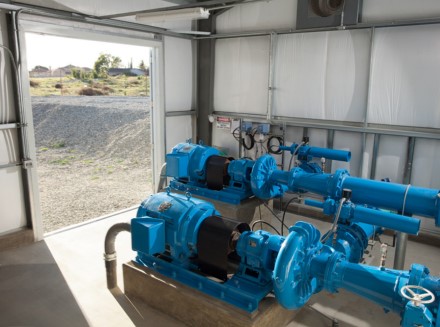 Since the power generated was planned to be exported to the grid, construction pertaining to interconnection with existing utility service connection was also conducted. Since this facility is the first small hydropower facility in the last 20 years to connect with Southern California Edison (SCE) lines, a new pole with an upgraded reclosers to protect the grid was installed at the facility. FWC was also required to expand the power service to 12 kV powerline.

Typical maintenance of a hydroelectric station includes the following:

An overview of the project cost estimated at two different times (50% design and nearing completion) is provided in Table 1 below. During 50% design, the project cost was estimated to be around $1,675,000 with calculated payback time of 8.4 years. However, as can be seen, the total project cost increased by $485,929 over the course of 1.5 years during construction. One major cause of this cost increase was the unexpectedly high interconnection cost with the SCE as a new pole with upgraded reclosers must be installed.

The breakdown of the project cost as of April 2014 is also provided in Figure 4 below. As can be seen, construction was the major contributor to the total cost (40%) followed by engineering, planning, and permitting (31%). Interconnection cost was also considered to be significant in this case (13%) due to the need to update the outdated equipment owned by SCE and the fact that this project was one of the first small hydropower projects that interconnected with SCE in the last 20 years. The turbine-generator cost was not considered to be major as PATs are generally less expensive than other similar turbines such as Francis turbines.

Figure 4. Breakdown of project cost as of April 2014

The Sandhill hydroelectric project has been operating for over four years and has met the initial estimations and expectations for the project, yielding no electric bill for the four years since commissioning using the Net Energy Metering tariff. As previously mentioned, FWC even received a $12,000 check from SCE as the facility has been generating excess energy. However, the tariff used for this excess energy is generally quite small and not attractive for small utilities that are looking to sell their energy.

The project’s success has led SGVWC to embark on another in-conduit hydroelectric project.  The new project, named B24 Hydro Project, will implement an innovative “Plug & Play” design for a 73 kW pump-as-turbine.  It should be noted that the B24 project is being partially funded by California Energy Commission’s (CEC) EPIC Grant. 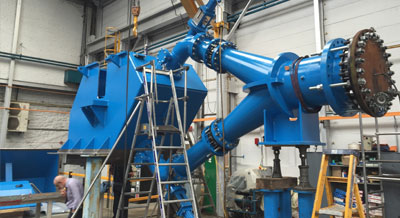 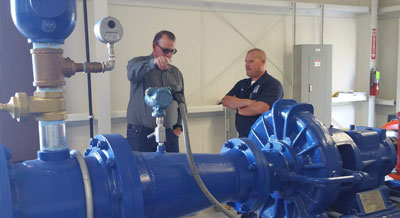 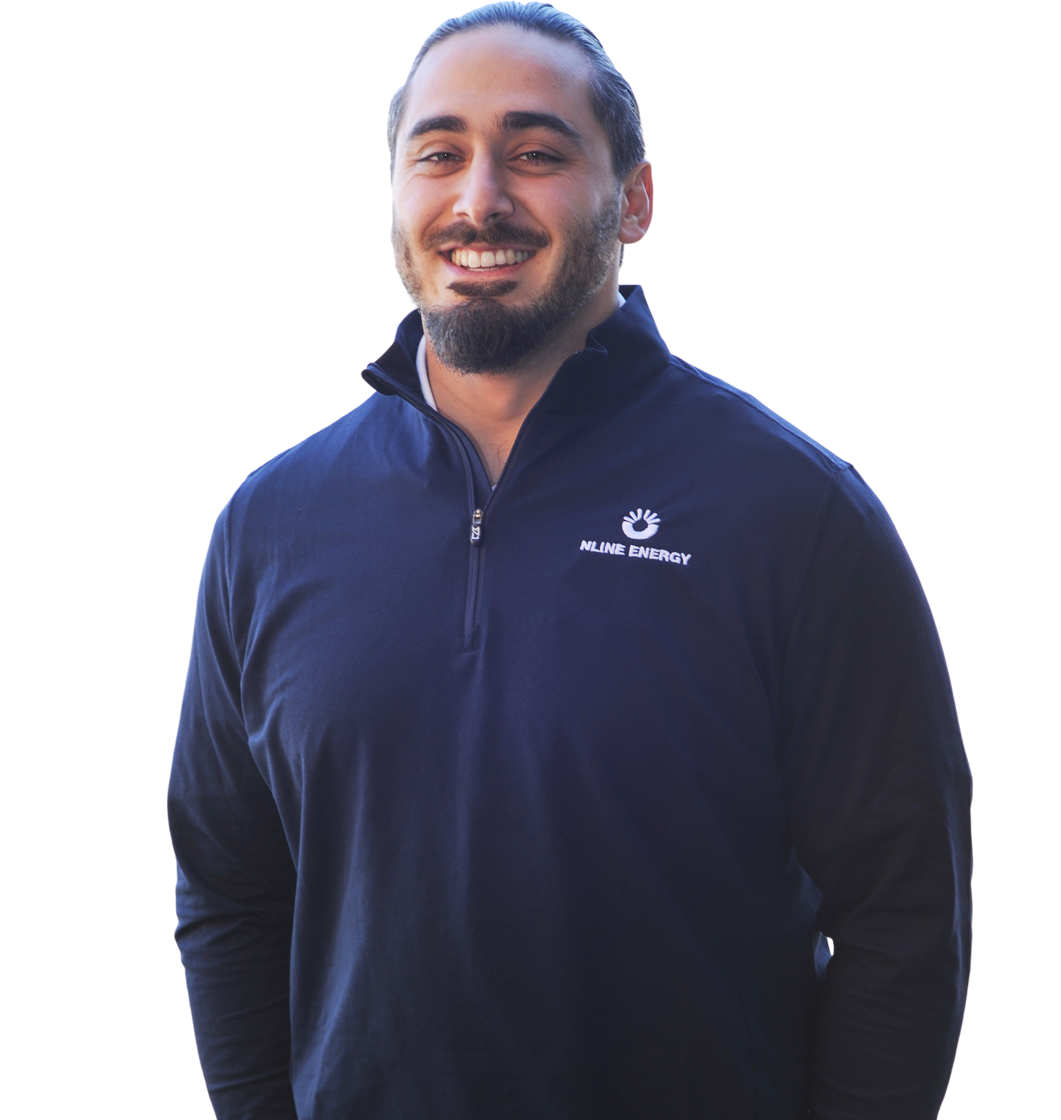 How big is your opportunity?

Are you sitting on a source of wasted energy? Would you like to convert this into clean, renewable power?

We are your partner. We are the #1 small hydro provider in the U.S., and offer the world’s most efficient steam backpressure turbine.

Give us a call! You’ll get a no cost assessment with an expert who can instantly identify your opportunity.

How big is your opportunity?

Are you sitting on a source of wasted energy? Would you like to convert this into clean, renewable power?

We are your partner. We are the #1 small hydro provider in the U.S., and offer the world’s most efficient steam backpressure turbine.

Give us a call! You’ll get a free consultation with an expert who can instantly identify your opportunity.